10 Famous People You Could Spot in Sheffield

Get out your bird watching log books and replace Garden Warbler with Def Leppard. Here are ten famous faces whose faces you could see around Sheffield. 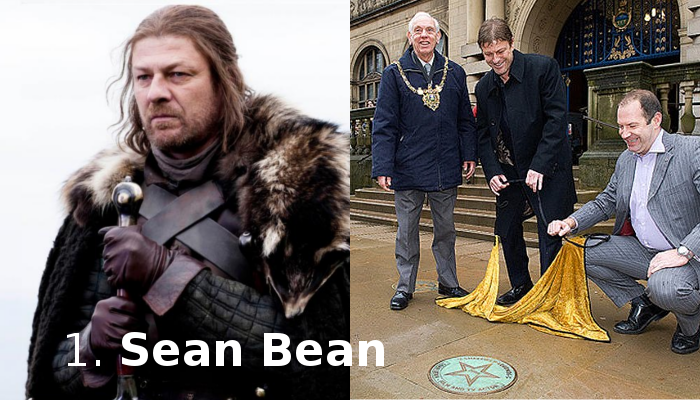 “Sean Bean has been seen.” That’s what my grandpa said after the Game of Thrones actor came into his local pub. Maybe that’s something a lot of Sheffield drinkers can say — Bean does seem to like a pint. Football, too — he’s a lifelong Sheffield United supporter, and headed their team in a 2016 celebrity charity match at Bramall Lane. He faced a Jack Whitehall-led Fulham team. Of course, Bean United won.

Before making a killing in roles such as Ned Stark in Game of Thrones, and Boromir in The Lord of The Rings, Bean lived in Handsworth, a suburb a few kilometers east of Sheffield city center. For a time he worked in the same foundry as his Mum and Dad, making steel strings (now he only tugs at heart strings, of cinema-goers).

In the picture above, Bean is getting his Sheffield Legend star paved. You can see if you visit Sheffield Town Hall, along with some of the other names on this list. Have a visit, and see which ones you can spot. 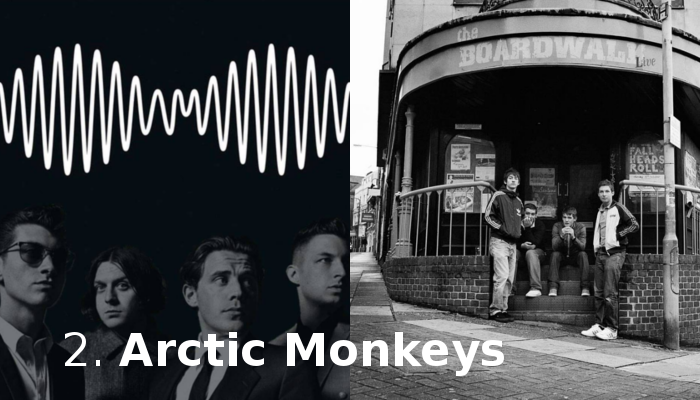 Do you recognize the building the boys are standing in front of on the right hand side of the above image? Visitors to our city centre apartment building should do — it’s on the other side of street from us! It’s not called The Boardwalk anymore, nor is it a club, but that distinctive corner entrance is easy to recognize.

Cool story, actually. The band’s very first demos, recorded at 2fly studios, were handed out around Sheffield on untitled CDs. Being the ex-workplace of frontman Alex Turner, The Boardwalk got its share of these demos. When a fan wanted to upload the songs to a file-sharing network, he named them  after the location he had received the CDs. That’s why these recordings, including early versions of I Bet You Look Good on the Dancefloor and Fake Tales of San Francisco are collectively referred to as Beneath the Boardwalk. 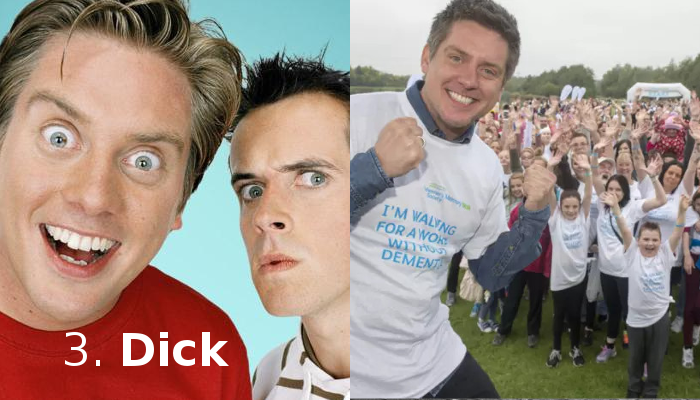 Before Richard McCourt was causing havoc In Da Bungalow, he was causing havoc in Tapton Secondary School in the western Sheffield suburb of Crosspool. Tapton will show up a few more times on this list, actually.

Dick got his start in Sheffield radio, including volunteering for the hospital radio station and going on to work on Meadowhall Radio and Hallam FM. It was upon graduating to BBC Radio 1’s Sunday morning show that he first worked with the second part of his double act, Dominic Wood AKA Dom. 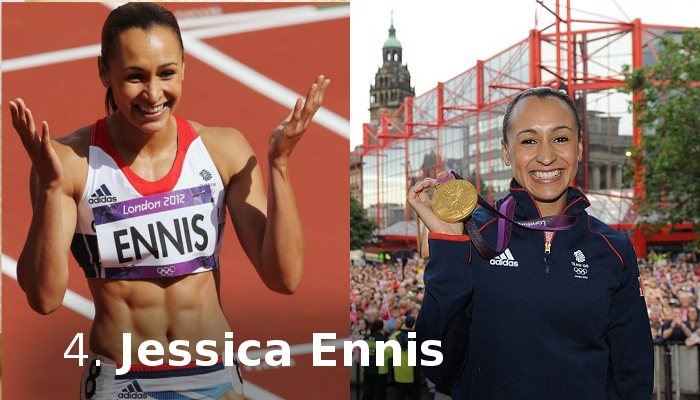 Ennis grew up a stone’s throw from the Sheffield United football ground, and spent most of her life, from the age of 10, training at Don Valley Stadium. That’s where she won her first athletics prize: a pair of trainers.

Ennis carried England’s hopes with her when she traveled south to the Olympic Stadium in 2012. When she returned, she was waving a gold medal, as captured in the picture above (taken near Sheffield City Hall).

Even more so than the rest of Britain (if possible), Sheffield is highly proud of its world class heptathlete. 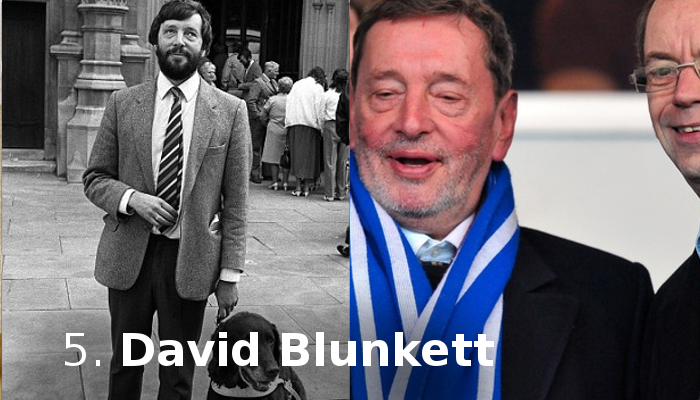 A well loved politician. The sightless Sheffield Brightside MP turned out to be a stellar education secretary, and later home secretary, even if the end of his career was marred by an unexpected sex scandal.

Sheffield wasn’t always kind to David Blunkett while he was growing up, though. While the family was living at Parson’s Cross, Blunkett’s father died in a workplace accident at Neepsend Gas Station. Because the company withheld compensation (on the basis that father Blunkett had worked past retirement age), David and his mother were left to live on a Sheffield council estate in poverty.

Perhaps it was these early hardships that gave Blunkett the determination and motivation to succeed as a politician. Later, speaking of his misfortune, he said:

“You either go under or it gives you a core of steel.”

A great fit for the Steel City, then. He’s no longer an MP, but Blunkett will forever have an unbreakable tie to the area. Above he is seen watching a Sheffield Wednesday match with the team’s colours around his neck. 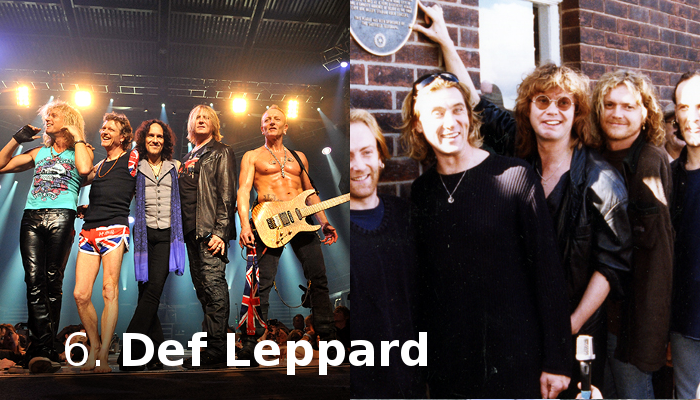 From blind to Def. One of the best selling Rock bands of all time was founded in Tampton secondary school. They first rehearsed in Portland Works spoon factory, not far from Bramall Lane stadium, and their first performance was at Westfield school.

Forever weighing on the band’s history are the high profile tragedies that they have suffered. Their drumer, Rick Allen, was one example. While driving home to Sheffield on the A57 in 1984, he was involved in a car crash that severed his left arm. In an uplifting turnaround, he continued to play the drums with the band, and contributed to the most successful period in their history.

Some years later, the Hillsborough born guitarist and songwriter for the band, Steve Clark, sadly died from alcohol poisoning.

The band are honored with plaques at key performance locations around the city, including The Broadfield pub on Abbydale road, Crookes Social Club (pictured above with the band in 1995), and Don Valley Stadium. They also have a Sheffield Legend star on the pavement outside Sheffield town hall. 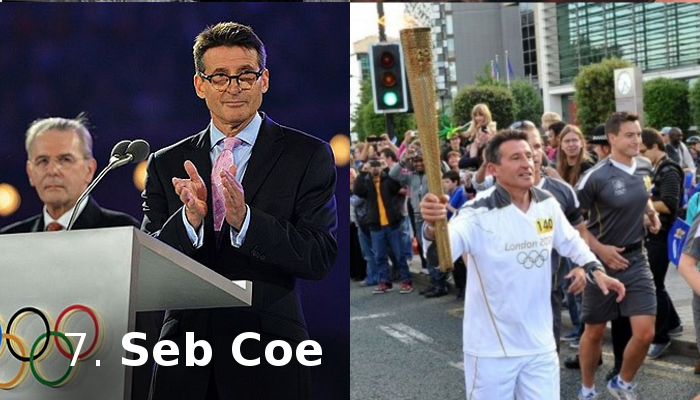 One of Britain’s most respected athletes, and his story started, as did several others on this list, at Tampton Secondary School. What do they feed those kids at the Tampton cafeteria?

The gold medalling Olympian points to a particular teacher as an inspiration: David Jackson, a geography teacher but also an accomplished cross-country runner outside of school, who encourages Seb to join the school athletics team.

It’s a good thing he did: Seb Coe went on to regularly smash world records in running starting in 1979, when he was 22 years old, including the rare feat of holding world records in both the 800m and 1500m.

If it weren’t for Coe, Britain might not have hosted the Olympic Games in London in 2012. He was the ambassador for the bid and later the chair for the bid company, and by all accounts did a fine job, allowing us to win the bid even against strong competition from Paris and Madrid.

Seb was born in London, as he pointed out in an interview with The Star: “I wasn’t born in Sheffield. But my parents had the great good sense to raise me here.”  He also pointed out ““It was without a doubt the best place to train in the world, so beautiful and yet so demanding… Everywhere you run in this city seems to be uphill. It was great preparation for cross country races.”

In the picture above Seb is running with the 2012 Olympic torch down Arundel Gate, just about to pass the Millennium gallery. 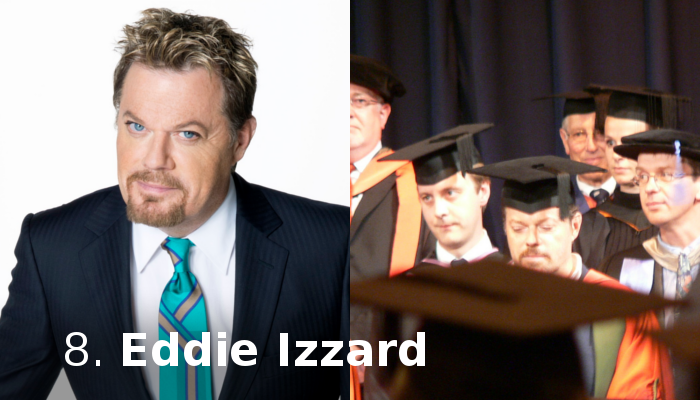 Comedian Eddie Izzard wasn’t born in Sheffield, but his time at Sheffield university turned out to be a key point in his life.

The course he signed up for was Accounting and Financial Management, Economics and Pure Mathematics, and if that sounds like a strange fit then your won’t be surprised to hear he only stayed for three terms. He seemed more interested in the drama club, where he performed shows like Sherlock Holmes Sings Western. He also started the Sheffield University’s Alternative Productions Society. He described his experiences in Your University magazine:

“So I got here and I didn’t do anything the first term, but after that I did a show the second term and a show the third term, and then they threw me out, and I just did loads of shows and slept on people’s floors and worked out that I was going to tell everyone that I was a transvestite and that was good, that was in Sheffield.”

In the picture Izzard is receiving his honorary degree from Sheffield University in 2006. Only thirty something years late. He still won’t do your accounts, though. 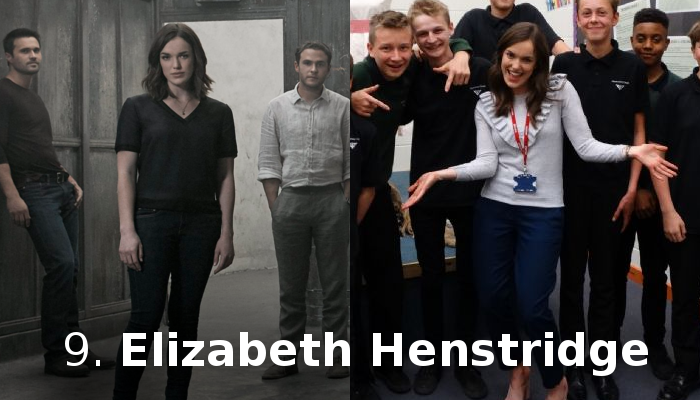 In the fame fight between Tampton and Edwards VII secondary schools, Henstridge is a point for Edwards. But it was actually her previous school, Meadowhead, that she attended from the age of 11, that proved to be more significant to her career. Her Year 10 school play of A Midsummer Night’s Dream, which was performed at The Crucible Theater in 2004, was her first taste of the stage.

Today, Henstridge is a Hollywood gal, working most prominently on Marvel TV show Agents of Shield as biologist Agent Simmons.

But she still visits Sheffield from time to time to see her family. Dr Marion Sloan, her mum, and a practioner at the Sloan Medical Centre in Nether Edge, said: “Elizabeth is still a Sheffield girl at heart… at Christmas she was home for three weeks, though she was more interested in seeing the dogs than me!”

The picture above was taken in 20013 when Henstridge made a nostalgic trip back to Meadowhead school to visit the drama students of the time. 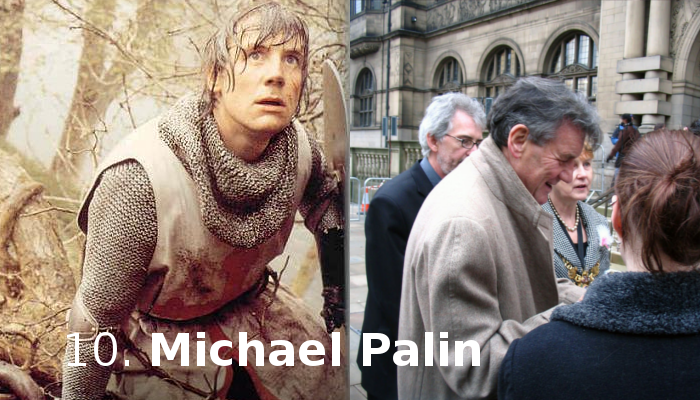 I’ll end with a favourite. I’ll mean Toby Foster no disrespect if I call Michael Palin the greatest comic from Sheffield. If you’ve ever enjoyed Monty Python’s Fish-Slapping Dance sketch, Dead Parrot sketch, or Lumberjack Song sketch, you’ve enjoyed some of the inimitable work of Michael Palin, who acted alongside John Cleese, Eric Idle, Graham Chapman and Terry Jones to deliver some of the most iconic and surreal comedy television and film of all time.

Palin, who is also known for playing Sir Galahad in Monty Python and the Holy Grail, grew up in Ranmoor, Sheffield. He father was an engineer that worked for a Sheffield steel firm.  He went to Birkdale school, an independent school located to the west of Sheffield city centre, which was at the time was for boys only.

Wondering what to buy as a souvenir from your visit to Sheffield?