An Event in Sheffield For Every Day In July (2017)

July seems to be a month for athleticism. Not only do we have Cliffhanger taking over the city center, giving everyone and their mothers an excuse to move-move their bodies, the pros will be putting the rest of us to shame several times over — there’s the British Bouldering Championships, the cycling Grand Prix, diving, and competitive ice skating, too.

Of course, one of the biggest Sheffield events of the year, the Tramlines Festival, also arrives this month. We’re feeling like it’s going to be a heck of a summer. If you’re looking to visit Sheffield, our serviced apartments are a great option for accommodation.

As before, we looked for events that will be easy to reach from the Sheffield City Centre. With no futher ado…

The cinema that tours the UK on the waterways is mooring at Victoria Quay for three days.

Each night will show a different movie at 9:30pm, namely 20 Feet From Stardom, Sunset Boulevard, and Rain The Colour Of Blue With A Little Red In It. There is a bar, and food and drink will be sold, or you can bring a picnic while you relax by the canal. Entry is free.

Here’s a video of the floating cinema in action:

Sun 2nd (and throughout July)

An Earthly Paradise: Gardens in Art at Graves Gallery
(www.museums-sheffield.org.uk)

You might know that Sheffield is one of the greenest cities in the UK. Now it will have an especially green arts gallery to match. You’ll almost be able to smell the flowers when you visit this garden focused exhibition, which will take place at Graves Gallery (that’s the one on the top floor of Central Lending Library).

Last month Sheffield was visited by Green Day tribute band, Green Haze. This week we have the real deal.

Billie Joe Armstrong and the gang will be playing songs from their twelfth studio album, Revolution Radio. Here’s the official video from the title track of that album, which you could soon be listening to live at Sheffield Arena.

We couldn’t find anything new happening on this date, but that doesn’t mean there’s nothing to do — get out there and sniff it out!

Sister Act at The Montgomery
(themontgomery.org.uk)

Sheffield’s own Easy Streeet Theatre Company are adapting the musical comedy story of disco diva Delores Van Cortier. When she has to hide in a convert after witnessing a murder, she brings a new rhythm to the lives of the nuns there. This one will get you tapping your feet. It starts at 7:15pm each night from July 5th to 8th. Tickets are £15.

Here’s an image of a Sister Act stage adaptation: 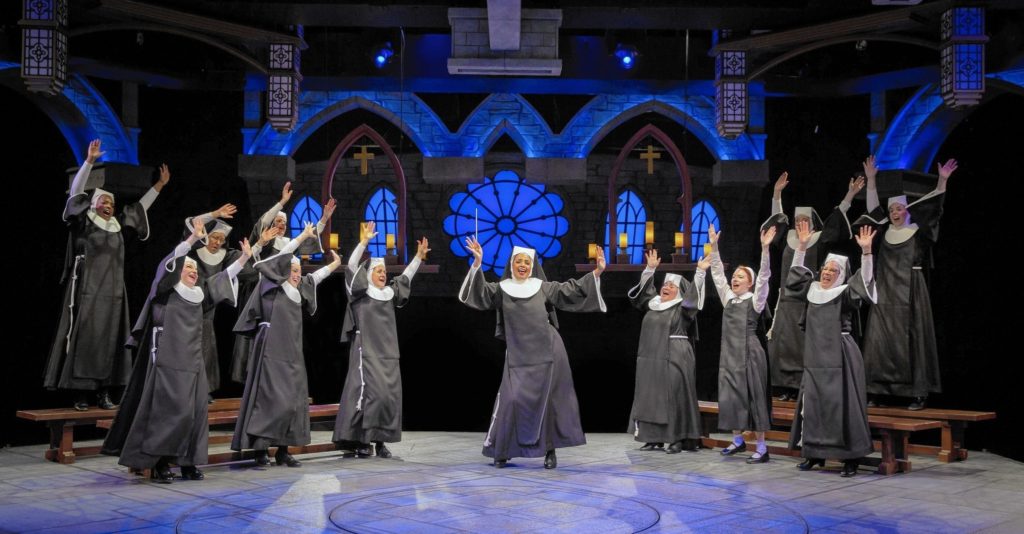 If you’re a William’s Serviced Apartments guest during this time, you likely don’t need to be told about this event, because you’re probably part of it! We have been the premier destination for the swimming competitors and their families since we started. We’re very proud to offer the talented young athletes a place to rest their muscles after training or competing at Pond’s Forge, which is only a short walk away from our building.

Spectators can buy tickets online or at the door. Here’s a link to the schedule.

With climbing walls, ziplines, stunts, yoga, crafts and food stalls, all set up right in the middle of the city, anyone who enjoys swinging their legs around once in a while will find something to enjoy at this free, family-friendly outdoors event.

The bulk of the activities will be available over the Saturday and Sunday, but the event kicks off on Friday at 5pm in Devonshire Green. The opening activities and demonstrations will be accompanied by live music and refreshments.

Here’s a great promo from Cliffhanger in 2013. At that time the event was in Graves Park, but be aware that it’s all in the Sheffield City Centre now. Click here to see the Cliffhanger event map.

We’re not sure what sort of freebies would befit the Dunkirk evacuation, but if you head to Cineworld Sheffield the 8th you can find out. There will be a promo truck there to show new footage of Christopher Nolan’s latest film (which, let’s be honest, will probably be a stunner). Sheffield will be only one of three UK destinations to get to see it, so don’t miss out. Also, don’t get there late: only the first 300 people to visit will get the free goodies.

Here’s a trailer for the film, which is in cinemas later this month.

This free-to-spectate, outdoors event puts sixty men and sixty women on the climbing walls (not all a the same time, though) to sort out who is the best Spider Man.

Being as close to the Peak Distict as it is, Sheffield is a climber hotspot. You will get a sense of that if you head over to Devonshire Green over this weekend. The competition starts on Saturday 9th, and the semi-finals and finals take place on Sunday.

Here are the highlight from last year:

Central Perk. Monica’s Apartment. Joey and Chandler’s Apartment. These iconic spots from the Friends TV show are recreated in Hillsborough Park, where you can lounge, take photos, and get foods and drinks for the relevant sets. Browse and buy Friends props, photos, and items of memorabilia, and enjoy other Friend’s related activities and shows. Could this BE any more Friends?

Tickets are £26. Here’s a video from the event as it appeared in a UK location last year:

War For The Planet Of the Apes Opens
(www.foxmovies.com)

Not only do we suspect this might be the Hollywood film of the year, it gets extra points for starring a Brit, Andy Serkis, in the starring role… even if that role is as a chimpanzee.

We’ve said it before, but Sheffield has some of the best cinemas in the country, so whether you try the huge Cineworld, the classy Curzon, the indie Showroom, or the brand spanking new The Light, catch something on the big screen this summer.

Here’s the trailer for War For The Planet Of the Apes:

The ice rink near Sheffield Arena hosts the British championships for figure skating, where you can watch some mesmerizing routines set to music. Tickets can be bought from iceSheffield on the day of the event.

Here’s one young skater’s routine from the event in 2014:

Canadian-American folk-rock singer-songwriter Martha-Wainwright, whose songs include “I Know You’re Married But I’ve Got Feelings Too” and “Bloody Mother Fucking Asshole”, is playing at Foundry, the music venue (open to all) at Sheffield University Student’s Union. Tickets are £30.25.

Here is one of Martha’s more recent songs, “Around The Bend”:

Toby Foster’s regular Last Laugh Comedy Club is here this weekend, and every weekend through July, with a different line-up each week. This week the stand-up show brings on Toby Foster, Tony Burgess, Sully O’Sullivan & Roger Monkhouse. This all takes places at Memorial Hall, the back room of Sheffield City Hall on Barker’s Pool, for £18 per ticket.

Here is a clip of Sully O’Sullivan doing his thing:

An LGBT day where food, music, and dancing take over the Peace Gardens. Show your support, bring a picnic, and have a fun in the sun.

Here is a picture from last year: 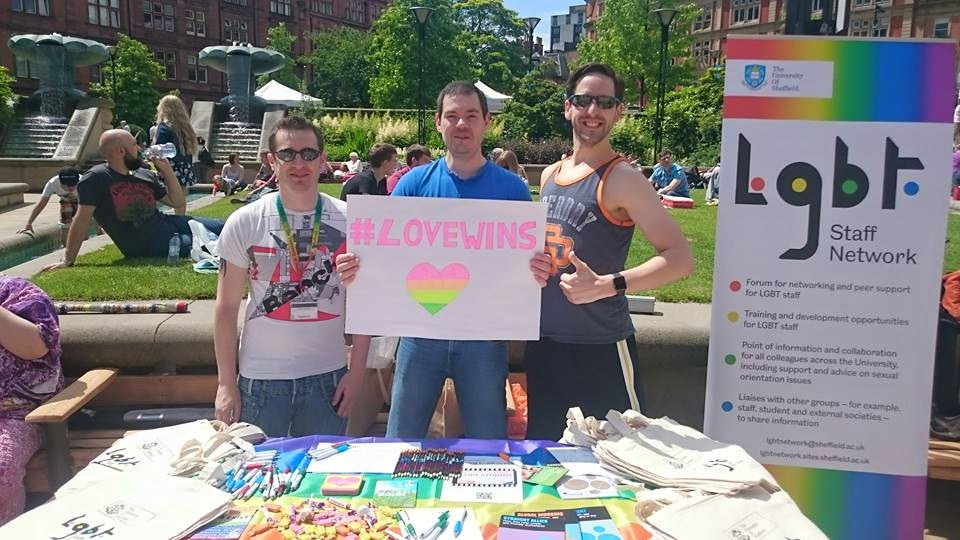 If you’ve ever enjoyed Pride and Prejudice or Sense and Sensibility, you might want to try this adaptation of another Jane Austen novel, Northanger Abbey. It is considered more of a comedy than her other works, and HeartbreakProductions are known for putting on a good show. If it isn’t your thing, though, don’t let that put you off visiting Sheffield Botanical Gardens, which is beautiful spot regardless.

Here’s a peak at the play:

We didn’t find anything specific to point to for this day, but don’t let us put you off: get out there and prove us wrong!

The Wedding Singer at The Lyceum
(www.sheffieldtheatres.co.uk)

With Sheffield city centre being a hotspot for theaters, it’s definitely worth getting out to see something. This musical interpretations of 90s Adam-Sander-with-a-mullet and Drew Barrymore comedy film is coming to the Lyceam, with tickets costing from £24.

The video below shows the Sheffield Theatres promo for the play:

What We Wished For at Crucible Theatre
(www.sheffieldtheatres.co.uk)

Another play, though one we suspect is a slightly different tone to the above. Sheffield Theatres describes it as “A heady mix of myth and magic” and a “story about the lessons each generation pass on to the next.” If those enigmatic tidbits have you curious, tickets are available starting at £15.

Here is the one picture we could find: 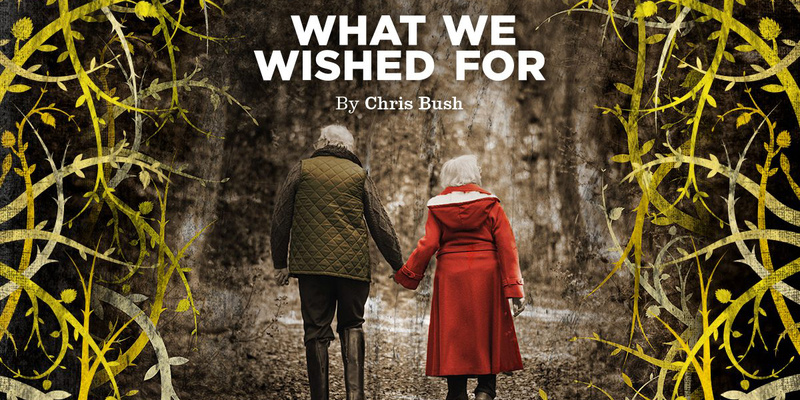 “One of the highlights of the elite road racing calendar, the event will see some of the country’s top professional riders going head-to-head for the prestigious red, white and blue national champions’ jerseys.”

At it’s north end the pedal-powered racers will come past the travel interchange on Arundal Gate. That’s only a few minutes from our serviced apartments, so if you’re staying with us take a moment to head over and cheer the athletes on. If you follow the race route on to Sheffield Town Hall you’ll find some stalls and refreshments.

Below is the race report from last years race, showing the cyclists as they sped through Sheffield city centre:

This three-day award-winning music celebration will have venues across the city. Major acts include Primal Scream, The Libertines and Metronomy, though there is so much live music over this period that you are bound to find something you’ll love. Tickets for the weekend are £49.50.

Learn about the dark side of Sheffield that most people don’t want you to know. This walk-and-talk for ages 18 and up delves into the grizzly tales of crime and killing in the Steel City. Tickets are £5.

The video below shows the leader of the tour talking about his company, Steel City Ghost Tours:

A wedding fair where “brides to be can bag a bridal bargain”, running from 12 till 3pm. We couldn’t find many more details about this one, but you can follow the link above to get in contact with the organizer. Also, congratulations!

Well, we seem to have a bit of a quiet period, but no worries — it’s still June at the time of writing, so something exciting is bound to make itself known. As soon as it does, we’ll update this page. You can help us, by leaving a comment, tweeting @williamsAPTS, or emailing info@williamsapt.com. Share the joy, tell us all what’s happening.

Sheffield By The Sea Side at the Peace Gardens
(www.welcometosheffield.co.uk)

Landlocked Sheffield transforms into a caricature of Whitby, Blackpool or the Isle of Wight. This free Peace Gardens events has plenty to do for kids. Let’s hope the illusion invokes the sun for the next month.

This great family video captures the seaside fun to be had:

Here’s a video (see if you can spot the Sheffield locations):

Here’s a video of a similar event in St. Mary’s Church:

There’s a blank space in our calander. This could be a Netflix night. Then again, you’re probably more resourceful than we are. Find something fun!

For the last event this month, we return to iceSheffield for another championship. We couldn’t find many details for this one, but it is an excuse to enjoy another graceful skating video, taken in Sheffield last year. Try and take you eyes off this one:

Come back next month for more things to do and to learn, and things to excite and inspire you, and most of all have a great time in Sheffield!

Be Prepared: Know Where Medical Care Can Be Found in Sheffield

The 8 Great Shopping Areas of Sheffield

How To Get To The Carpark