The 8 Great Shopping Areas of Sheffield

If you’ve never visited Sheffield before, the guide will take you from replacing your toothbrush to a Sheffield shopping spree.

If you have visited Sheffield before, you might learn about entire streets you didn’t know you needed to visit. Have you checked off all eight yet?

Coming in from the train or coach, the first stretch of shops that looks like a high street is Fargate, smack in the middle of the city. As this road winds down to the south things get a little quieter, with a few small chains and cheap looking independents, until it bursts back into life when you reach the newly redeveloped shopping boulevard, The Moor. The Moor and Fargate are currently in competition for the title of Sheffield’s premier shopping street. Meanwhile, a few streets away, the Devonshire Quarter acts like it doesn’t care and just tries to be as cool as possible. 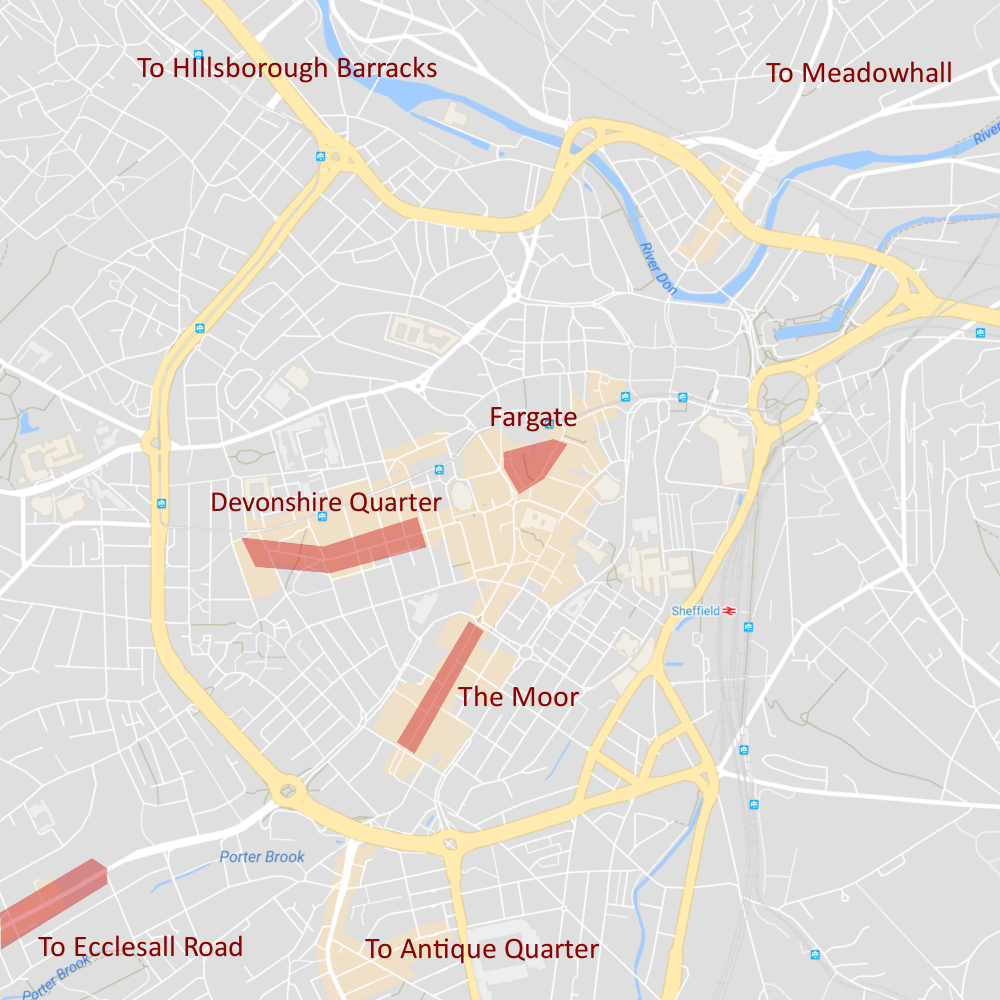 We’ve also noted three large shopping centres outside of the city centre limits — which, conveniently, are all at the end of a tram line. You may have heard of Meadowhall, the largest shopping centre in Yorkshire, which can be found at the end of both the yellow and blue supertram lines. At the other end of the yellow line is Hillsborough Barracks, and the other end of the blue line is Crystal Peaks.

The entire supertram map is here. It’s a great way to get around! 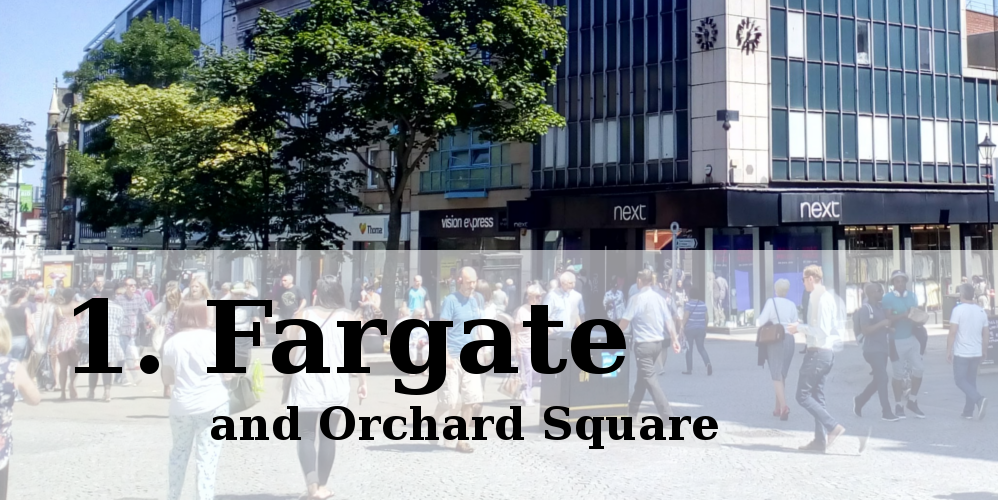 Fargate has traditionally been considered Sheffield’s High Street. A good place to start exploring the local shops, because it’s in right in the middle of the city and is close to fantastic public transport links out to almost anywhere else on this list.

You’ll find high street staples like WHSmith, HMV and Carphone Warphone, but the greatest portion of Fargate is dedicated to mid-range fashion. River Island is conspicuously placed at the head of the street, and working your way down you’ll find H&M, Topshop, New Look, and more. If you want something richer, the delectable cocoa at Hotel Chocolat and expensive fragrances at The Perfume Shop might tempt you.

Go through an arched tunnel at the head of the street and you’ll arrive in Orchard Square, which has a good size two-story Waterstones, a three-story TK Maxx, and really a very high number of coffee or tea shops for such a small space. Look up at the clock above Waterstones on the hour to see something charming and surprising. 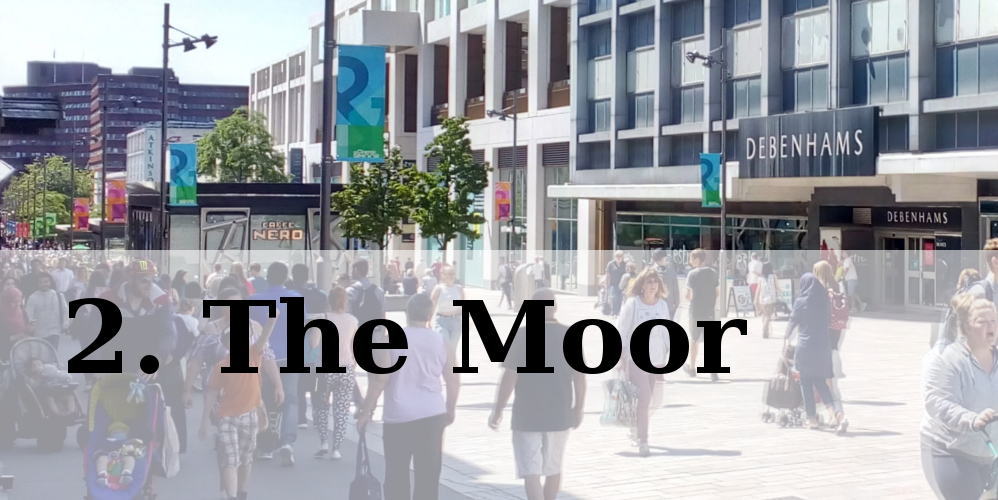 It’s brand spanking, and Moor. After an eight figure redevelopment, you would expect it to be a hot highway, and it right now it really is. There’s a lot of excitement and life in The Moor. The range of shops is eclectic, from the old guard of classic department stores (Debenhams, Atkinson’s), to a too-cool Cafe Nero that’s just sitting in a unit right in the middle of the street, to an outrageously large new Primark, to probably the last GAME on the highstreet, to a range of outdoorsy shops like Blacks, Naked Ape and Decathalon (to remind us we’re right next door to the Peak District and should get out there sometime).

The latest new thing is a nine screen luxury cinema called The Light — and it’s not like Sheffield wasn’t spoiled for cinemas already. Now you’re just showing off, The Moor.

The sprawling superstructure with the distinctive green domed roof is the largest shopping centre in Yorkshire, the eighth biggest in the UK, and it’s still growing!

As you would expect from that description, you can find a huge range here. An Apple Store, an Ann Summers, a Ted Baker, a Superdry, a Sony centre. The food offerings are as diverse as everything else, and mostly conveniently collected in a vast food hall called The Oasis.

Meadowhall brings crowds from around Yorkshire, so on a busy day you’ll have to be tolerant of throngs of people. Otherwise, Meadowhall can be deserving of it’s nickname,  “Meadow-hell”.

Here’s an interesting one. The biggest building in Hillsborough, a 19th century military installation built to house something in the region of one thousand officers, a few hundred horses, including an army hospital, school, training yard, detention centre — and it’s all been transformed into a shopping complex. It’s quite a dashing effect, and an unusual feeling to walk across a car park that used to be the parade grounds, or into a restaurant called The Jailhouse that used to be an actual army jailhouse!

A large Morrison’s dominates most of the Barracks, and a B&Q makes use of an the old rifle range. There are many smaller shops in units around the Barracks, too. It’s not high class shopping, but worth a visit. If the barracks doesn’t impress you, Hillsborough is a pretty suburb and good for a quiet pint or a cuppa in the afternoon. 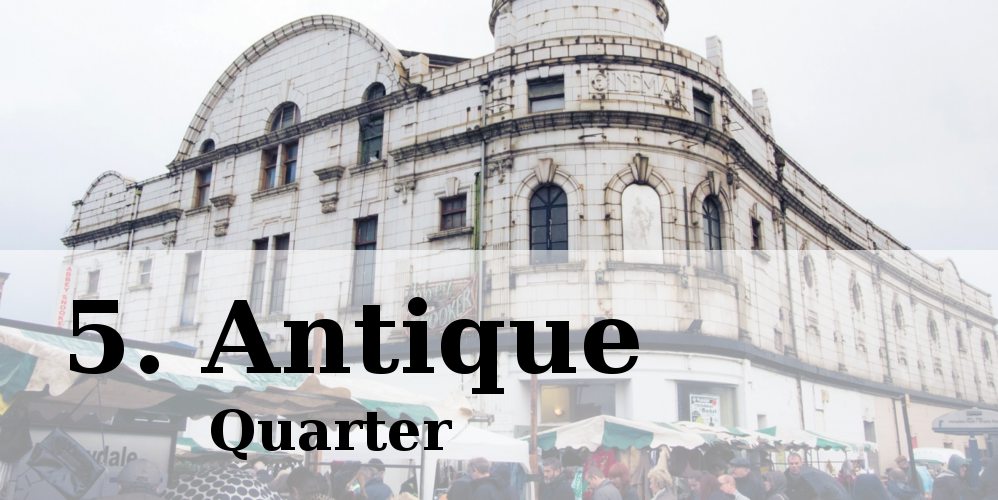 It’s not just antiques. As you have correctly guessed there are several antique shops in the area, but antique in this sense doesn’t just mean old and dusty — it means traditional quality. It means music on vinyl records, bespoke arts and crafts, handmade foodstuffs.

The Antique Quarter exists in the area about a mile south from the city centre, along Abbeydale Road and Chesterfield Road and the space between them. People from the area run a car boot sale every Sunday outside the derelict Abbeydale Picture House. 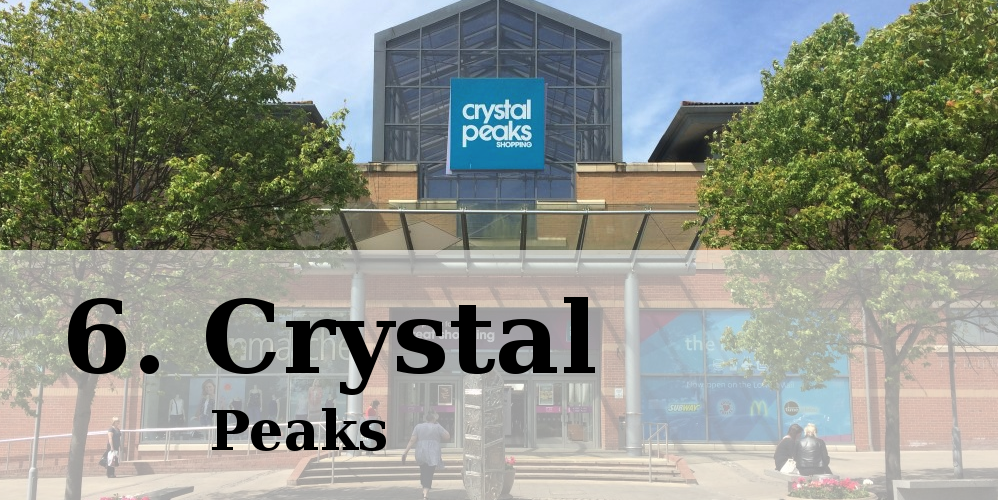 It’s far from the size or scope of Meadowhall, but this smaller shopping mall still has a lot to offer to the shopper, and is a popular destination. It has a wide variety of well known low to middle price stores, as well as its own food hall. It’s easily reached from the end of the blue tram line.

One thing Crystal Peaks offers that Meadowhall does not is an indoor market, where local traders set up stalls to offer a wide range of products and services from independent sellers. 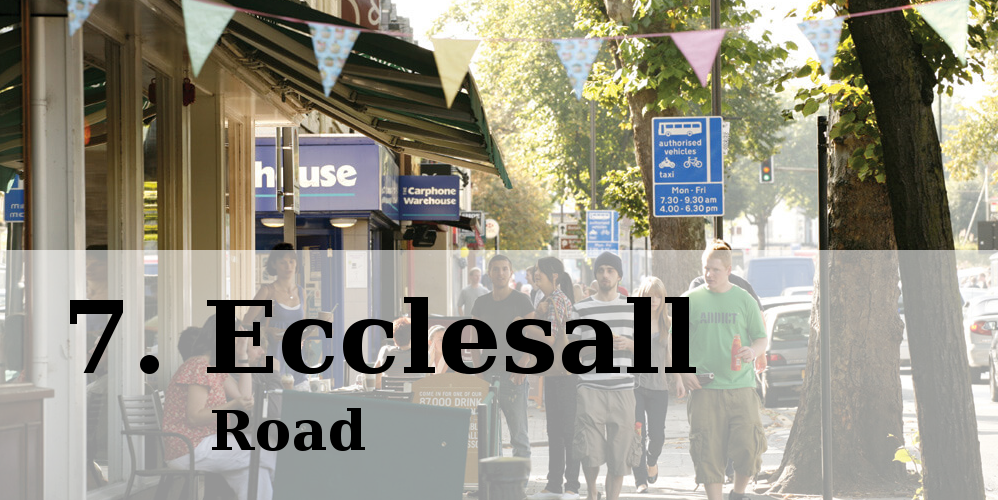 Ecclesall’s mix of being a rather wealthy district with having a hearty student population shows in the cosmopolitan bustle of its primary shopping street.

The boutiques here are wide ranging, from fresh cookies to second hand books. The Famous Sheffield Shop shows off an impressive array of Sheffield made metal products in very classy displays. Harrisson, the men’s outfitters, can have you looking dapper, while Party Down, the fancy dress shop, can have you looking like a Disney princess.

But Ecclesall road is best known for its food and drink, and whether you’re looking for french cuisine or a micropub you’ll find something to satisfy you. 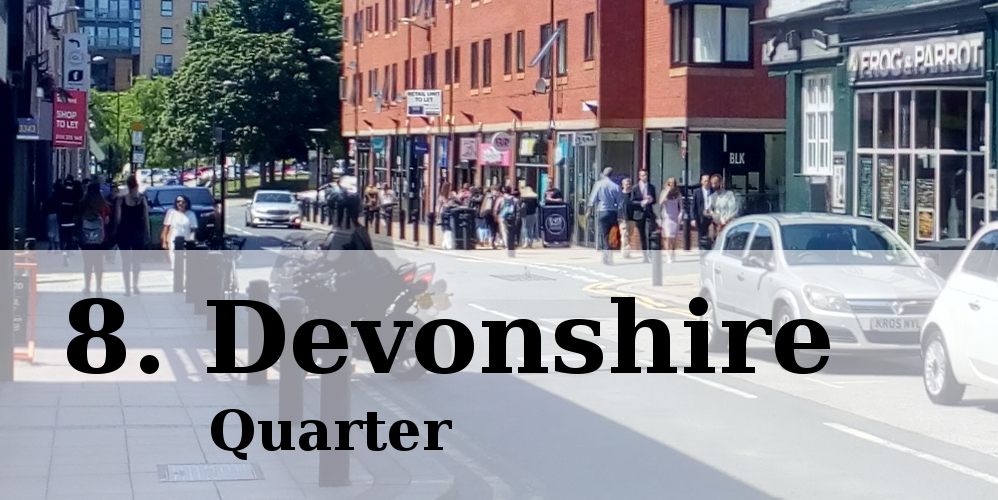 The streets of Devonshire Quarter are well known as the trendy part of town. The cultural keystone of the district seems to be the Forum cafe bar (where pizza is only served on sourdough), but a variety of pubs and bars will vie for your attention, including cool pool house (pool as in billiards) The Common Room, and punky craft brewery bar Brewdog. Between almost every pub is a clothing shop that specialize in a different prefix of chic, and a few curveballs like Private Shop will keep you guessing.

Right next to these shopping streets is Devonshire Green: a wide open green space with plenty of banks to lie back on with a cheeky daytime cocktail. A great way to wind down after a pleasantly tiring day getting to know a wonderful new city.

An Event in Sheffield For Every Day In July (2017)

Be Prepared: Know Where Medical Care Can Be Found in Sheffield

How To Get To The Carpark